In this guide you will learn how to:

In this step you will clone the self-host repository.

In your terminal, clone the forem/selfhost repo to your local computer with:

In this step you will run the automated script we have in place to perform several of the necessary setup tasks for you.

In your terminal change directories to selfhost with:
cd selfhost

In your terminal run the setup script with:
./setup

You should see generated vault secrets. Save these to add to the setup.yml file in step 4.

In this step you will edit select Ansible inventory variables to make the Forem instance your own. You will change the default email to use an email you prefer. You will add your own domain name, subdomain. You will also add a preferred host which is used as the server host name to send email server side.

In the selfhost/inventory/forem/setup.yml file, edit the following Ansible inventory variables:

Note: You can leave the subdomain and hostname as the defaults www and host if you prefer.

Step 4 - Adding the Ansible Vault Secrets
In this step you will use the Ansible vault secrets generated with the automated setup script. You will replace the example secrets in the setup.yml file.

Note: See this URL to learn more about ansible-vault.

Copy the generated vault_secret_key_base secret and add it to your setup.yml file. 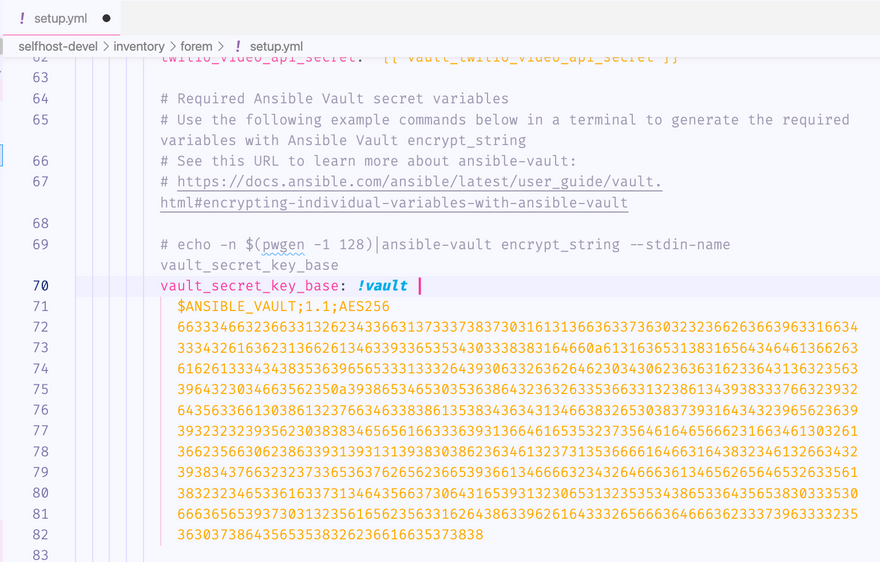 Copy the vault_improxy_key secret and add it to your setup.yml file like you did with the vault_secret_key_base secret.

Copy the vault_imgproxy_salt secret and add it to your setup.yml file.

Copy the vault_forem_postgres_password secret and add it to your setup.yml file.

If you choose to use DigitalOcean or Google Cloud, you will need to generate a SSH key and save it to ${HOME}/.ssh/forem .

You can follow the Github tutorial on how to create an SSH key or the steps below:

In your terminal paste the text below, substituting in your GitHub email address.

This creates a new ssh key, using the provided email as a label.

When you're prompted to "Enter a file in which to save the key," press Enter. This accepts the default file location. copy the default location that is in your terminal. ex: /Users/you/.ssh/id_ed25519

After you have saved the file you can change its location to ${HOME}/.ssh/forem with the following command:

Note: replace /Users/you/.ssh/id_ed25519 with the default file location on your computer.*

If you use AWS, you will need to generate an RSA-based SSH key and save it to the file path ~/.ssh/id_rsa.pub

To generate an RSA based SSH keys in macOS, follow these steps:

In your terminal type:

When you execute this command, the ssh-keygen utility prompts you to indicate where to store the key.

Press the ENTER key to accept the default location.

The ssh-keygen utility prompts you for a passphrase. Please add a secure passphrase.

By default, your private key will be saved to the id_rsa file in the .ssh directory and is used to verify the public key you use.

In your terminal, type:

This will confirm you have both your id_rsa private key and id_rsa.pub public key.

At this point, you will need to pick a supported cloud provider and set it up on your workstation.

You can follow the cloud provider specific guides to finish setting up your self-host instance.

Once unpublished, this post will become invisible to the public and only accessible to Christina Gorton.