Forem Creators and Builders 🌱 is a community of 3,458 amazing creators

Adding microdata attributes to Forem's articles as described in Schema.org.

The posts from Forem communities could use the Article type from Scheme.org to structure the data and create relationships within the content. Regular users wouldn't see a difference, but the page would get a semantic boost beyond HTML5, which would be good for SEO and other sites to get detailed information.

That way, the article would be associated with:

Why is it needed?

There is an integration issue between Medium and DEV/Forem. If I go to Medium and import a story from DEV, the date is always wrong. In particular, the article's date is not the DEV article's date, but the date the user joined DEV.

This seems to happen –and this is me speculating– because the articles don't clearly identify which of the many dates on the page is the article's date. Then, Medium picks the first one available as the article's date, which happens to be the author's information signup date: 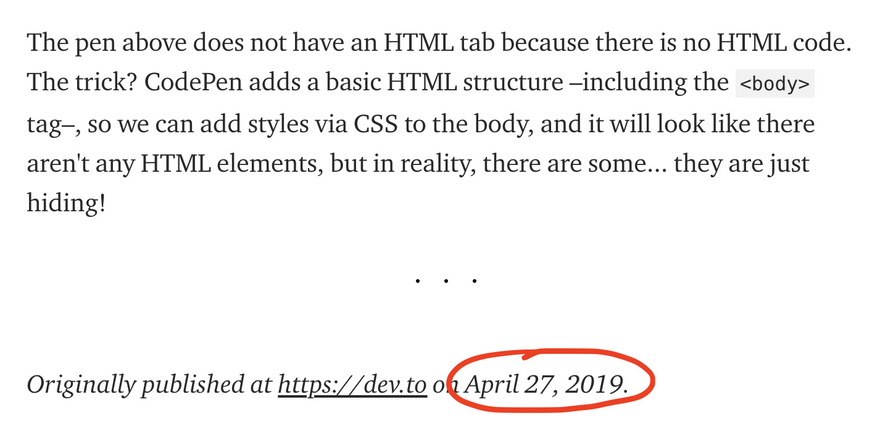 This is a problem because articles exported to Medium will have old dates and won't appear as new on that platform. However, there's a workaround: users could copy Forem's articles and paste them onto Medium, but then the canonical reference to Forem would be lost.

This is most likely an issue on Medium-side, but it could potentially be prevented by making some changes on Forem-side. I could think of two options:

Why is the OpenSea clone script the perfect choice for Entrepreneurs?

Once suspended, alvaromontoro will not be able to comment or publish posts until their suspension is removed.

Once unsuspended, alvaromontoro will be able to comment and publish posts again.

Once unpublished, all posts by alvaromontoro will become hidden and only accessible to themselves.

If alvaromontoro is not suspended, they can still re-publish their posts from their dashboard.

Once unpublished, this post will become invisible to the public and only accessible to Alvaro Montoro.

Thanks for keeping Forem Creators and Builders 🌱 safe. Here is what you can do to flag alvaromontoro:

Unflagging alvaromontoro will restore default visibility to their posts.