Forem Creators and Builders 🌱 is a community of 3,475 amazing creators

If you're a Forem Creator, you've likely seen this view on the Admin page for a single article: 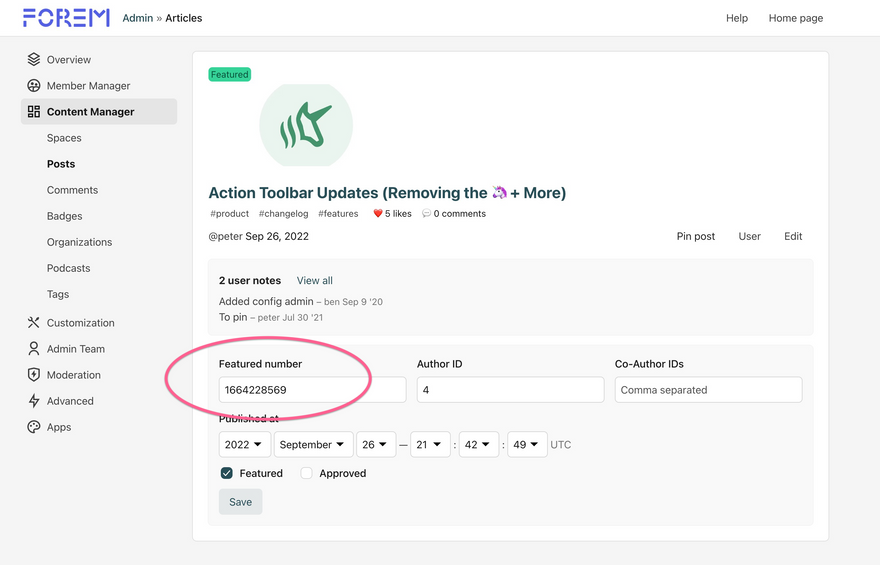 The "Featured Number" used to be used throughout the application, but it has been deprecated now for som etime. As such, we are removing this functionality in a set of PRs [1] [2] courtesy of @fdocr .

This is just one in a series of upcoming improvements intended to stabilize and simplify the application, removing legacy functionality that may be causing you confusion.

Ultimately, this is a fairly inconsequential change, but we are beginning a new practice of better over-communication of the context behind our changes.

Discord game marketing Services - the quickest way to the top

Once suspended, peter will not be able to comment or publish posts until their suspension is removed.

Once unsuspended, peter will be able to comment and publish posts again.

Once unpublished, all posts by peter will become hidden and only accessible to themselves.

If peter is not suspended, they can still re-publish their posts from their dashboard.

Once unpublished, this post will become invisible to the public and only accessible to Peter Frank.

Thanks for keeping Forem Creators and Builders 🌱 safe. Here is what you can do to flag peter:

Unflagging peter will restore default visibility to their posts.