Straight to the point

For a couple of weeks, I've been working on a project called t2d [Talk to Dokku]. The main objective of this tool was to create a Terminal UI in such a way that it will reduce the hassle of recalling dokku commands.

It consists of 2 ways of configuring things. One is the Advanced/Manual setup, where the user can add his required Plugins, Buildpacks, ENV variables manually. While the other was an Automatic setup, where this t2d script shines. All the Automatic scripts work in Q and A fashion, where the user will be prompted with a question, and the answer usually will be a "Yes or No" or to "Providing an appropriate Input/value."

Like this: To list all the available steps, I triggered the "n" but by triggering "y" you can install Forem, without any Errors. 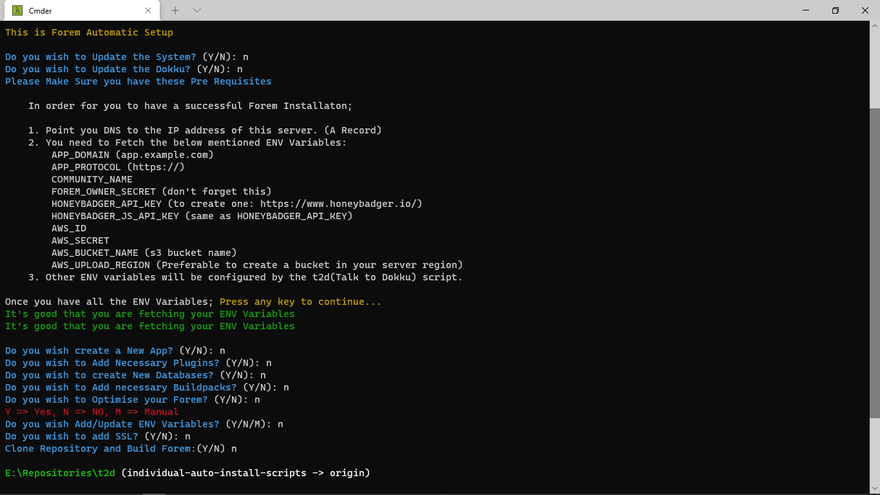 Does it really work?

Yes!! Till now I have configured two production Forems. One is my own community and the other one was @gurulhc community

If you want to know about the pre-requisites for using the script, you can view here.

As many Forem users asked me to help configure their instance, I spent my weekend writing the Automatic Script for Forem as my first script.

If anyone is interested in knowing about it, please let me know. Also, I would also like to nudge the @forem team @ellativity to confirm whether it is ok for me to share my script here.

Difficulties with the RSS import tool

Akhil Naidu
I am an Engineering Physics graduate from IIT Guwahati, but merely not restricted to Physics itself. In the past few years, I involved in many Cybersecurity blogging and now on Open-source.
ArgumentError: wrong number of arguments (given 3, expected 2)
#help #selfhost #resolved
A small request to all the t2d script users
#t2d #selfhost
Self hosting Forem on Digital Ocean.
#selfhost #creatorwalkthroughs

Once suspended, akhil will not be able to comment or publish posts until their suspension is removed.

Once unsuspended, akhil will be able to comment and publish posts again.

Once unpublished, all posts by akhil will become hidden and only accessible to themselves.

If akhil is not suspended, they can still re-publish their posts from their dashboard.

Once unpublished, this post will become invisible to the public and only accessible to Akhil Naidu.

Thanks for keeping Forem Creators and Builders 🌱 safe. Here is what you can do to flag akhil:

Unflagging akhil will restore default visibility to their posts.