I've been trying to help people crosspost to the Development Hackers forem because it really is a win-win.

Everyone is always interested at first but they rarely get to it. I tried talking about the RSS import tool (which makes the process 99% easier) and they get very excited, but still don't do it.

I think it sounds a bit intimidating. A lot of the content creators I talk to don't really know what's an RSS feed or where to find it.

So I'm writing a custom page on why and how to crosspost, and how to leverage the RSS import tool. I hope that will make the process easier. You can of course copy the content of my page or give me feedback haha (it's still a work in progress).

Now there's one extra difficulty which I'd like to get out of the way. It's editing and publishing an RSS-imported post.

Since these posts are imported as Drafts, to publish them you need to go in the post editor. But for RSS-imported posts it only opens up the basic markdown editor on my side. Not the Rich + markdown editor we are used to.

And in that editor... there's no publish button. Check out what I'm seeing below: 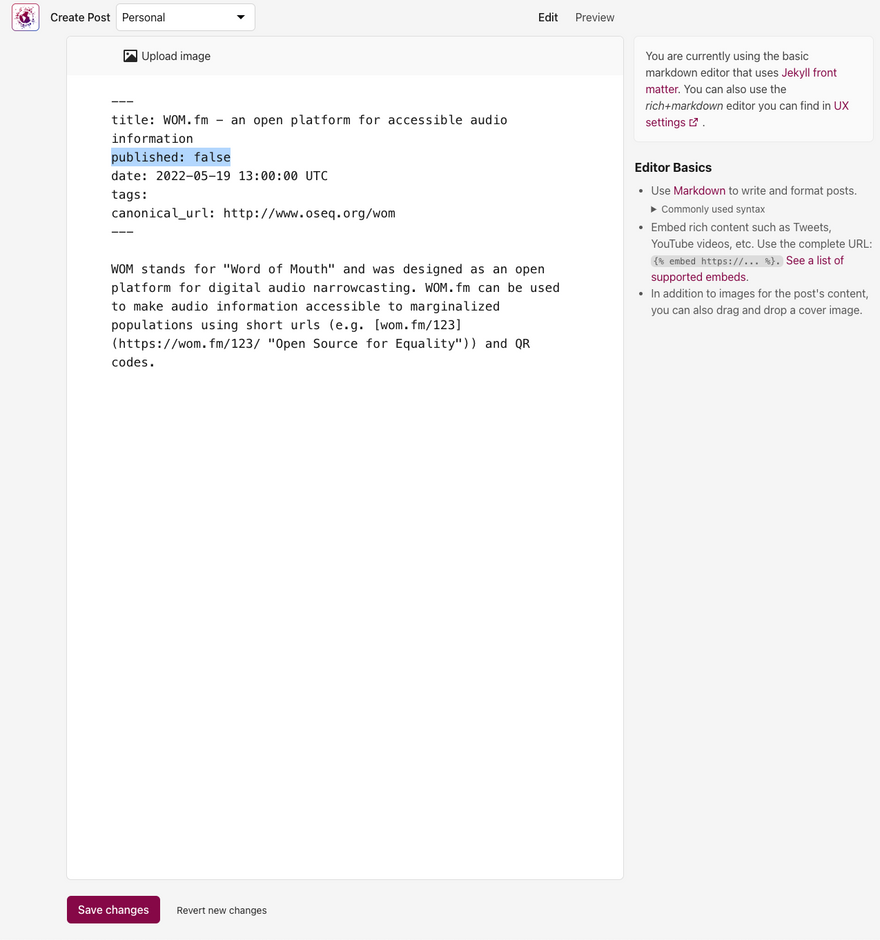 The only way I've found to publish an RSS-imported post is to modify that piece of text I've highlighted from
published: false to published: true

I mean that's doable but it's an extra step I'd prefer to avoid when explaining to content creators how to crosspost. If these content creators want to edit their posts, it's also a bit unfortunate that they don't get access to the rich+markdown editor too as it's much more user-friendly.

Or am I missing something? My forem's updated to the latest version.

Anyway, have any of you had success with getting people to crosspost using the RSS-import tool? Do you have any tips?

Altcoin Season in the Market – These Coins to Explode in 2023

Any freelancer to deploy Forem in Digital Ocean?

Once suspended, rayan will not be able to comment or publish posts until their suspension is removed.

Once unsuspended, rayan will be able to comment and publish posts again.

Once unpublished, all posts by rayan will become hidden and only accessible to themselves.

If rayan is not suspended, they can still re-publish their posts from their dashboard.

Once unpublished, this post will become invisible to the public and only accessible to Rayan Nait Mazi.

Thanks for keeping Forem Creators and Builders 🌱 safe. Here is what you can do to flag rayan:

Unflagging rayan will restore default visibility to their posts.